This is the simplest sourdough recipe, with just a starter, strong white flour, water and salt. No seeds, no flaxseed, no bells & whistles.

The important thing is the careful folding of the dough - there are a ton of YouTube videos on the subject, and it doesn't matter at all if you fold it over in the middle, or in thirds, or an a full moon with a black cat in the kitchen. The main thing is that you fold every half an hour in the first 3 hours of the process, and that you fold and shape after the two rests.

If you follow that, you can't go wrong. Make sure your dough hydration is right - it should look like all the sourdough you see in YouTube folding videos, so I won't bother adding video # 127.

Depending on how hydrated your sourdough starter is, you might have to vary the amount of water you add. You want a hydration of around 75%.

Combine flour, starter, salt and water just until there is no more dry flour left, and and let them autolyse for 30 minutes. This means you just let the mixed up ingredients sit. 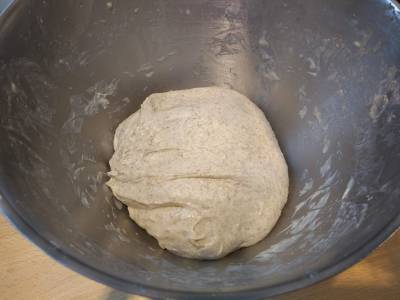 Then mix up the ingredients until they are properly combined, and fold three times every half hour for 3 hours. Then let rest for 2 hours. The photo on the right shows the dough after three hours of folding every 30 minutes.

Take out of your bowl and put onto floured surface. Fold another three times, shape into a tight round, and cover it with a bowl for 30 minutes bench rest.

Put into your proving basket with the seam up, pre-heat the oven to 230 degrees, and let the dough sit for a final rise of 30 - 60 minutes whilst the oven is heating up. 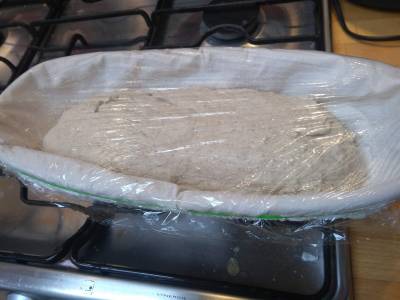 Put some cling film over the proving basket so that the top of your bread won't dry out.

Turn out of the proving basket onto your baking tray and score the top with a sharp knife. 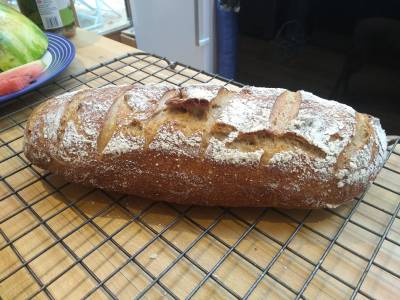 Looks fantastic on the outside, and on the inside: 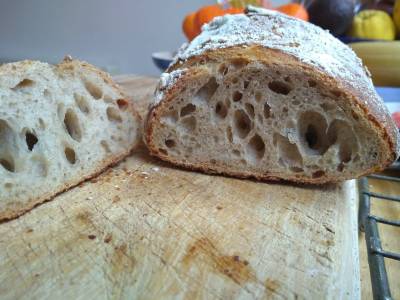 There are lots of different recipes for this type of bread out there, and lots of people use Dutch ovens or Le Creuset pans. You don't need all that, as you can see in the photo above, baked on a simple tray in the oven is just fine.

This is what I do on a workday…

On the night before you want to bake, mix 200g of rye flour with 230ml of water, and add whatever sourdough starter you have in the fridge. Mix, and take away everyhing in excess of 400g, and keep it as your next sourdough starter.

Keep both outside the fridge overnight.

In the morning before going to work, put your next starter that you took away from the new batch into the fridge for your next bake. Add 500g of strong white flour to your 400g of starter, 80g of mixed seeds, 11g of salt, and 280ml of water. Mix with a spoon, and put the bowl covered with cling film into the fridge.

When you get back from work, take the bowl out of the fridge and fold 6 times, and let rest for 30 minutes.

For another 4 times, fold 6 times and let rest for 30 minutes.

Except where otherwise noted, content on this wiki is licensed under the following license: CC Attribution-Share Alike 4.0 International